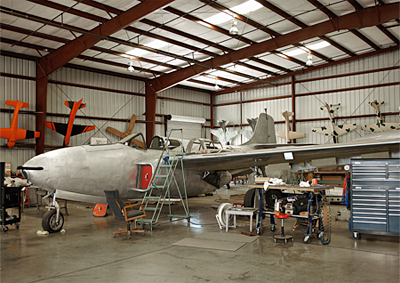 Since the 1970s, the Planes of Fame Air Museum has been actively involved in the restoration to flight of historic aircraft. Many of these aircraft of past years are now among the flying aircraft within the Museum’s collection.

Expert technicians, working as volunteers, have contributed thousands of hours to these efforts. Each project is unique, but all involve meticulous study of photographs, diagrams, plans, and other historical documents to ensure an accurate reconstruction of our flying heritage.

Each component of an aircraft under restoration is carefully inspected and tested. Replacement Parts are sometimes difficult to locate, and in some instances have to be fabricated from scratch. We strive for historical accuracy as much as possible, but always with an eye and ear to safety – our highest priority.

Modern techniques are employed whenever possible, but in many cases, it comes down to the handiwork of a skilled craftsperson to drill, drive, buck and install rivets, reshape or replace a spar, or install a wire harness.

Virtually all aircraft of the Second World War were mass-produced, and the idea that these aircraft would still be flying nearly 80 years later would probably seem strange to the men and women who built them so many years ago. But, through the efforts of Planes of Fame Air Museum volunteers and staff, aircraft that might have forever been lost are resurrected to fly again.

Each project may take years to complete, but the results are more than satisfying. All donations are placed in an unrestricted fund to help 'Keep 'em Flying' and preserve aviation history for future generations. Here are the current restoration projects underway:

For more information on donations and ways to give, please contact Liz Esparza at liz.esparza@planesoffame.org or call (909) 597-3722, ext. 120

Subscribe to our newsletter and stay up-to-date with upcoming events and new additions to our collection!
Online Gift Shop